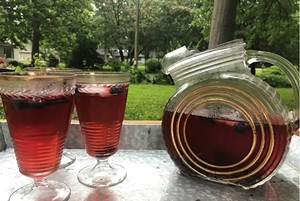 Long before folks were drinking tall glasses of iced tea, tea was a staple in the heavily spiked alcoholic punches that were popular in the young United States and much of Europe throughout the 18th century. Taverns and private clubs had their own proprietary and often highly secret punch recipes, and it's easy to imagine the founders hunkered down over cups of tea punch as they penned this country's founding documents. The earliest tea punches were often made from green tea rather than black, but by the 19th century the more astringent black teas were favored for use in punch. It was at the 1904 World's Fair in St. Louis where iced tea, as most of us know it, was popularized.

More than a century later, the options for enjoying and making iced tea are infinite and have expanded beyond true tea made from tea leaves (yes, tea is a plant). An increasing variety of herbal blends for both hot and cold consumption are available, opening up a world of beverage choices beyond the standard glass of iced tea.

"Lots of iced tea that you get is just weak black tea – sometimes there's fruit in it, but there is so much more variety there," explains Gordon Davis, owner of Whimsy Tea Company in downtown Springfield. "We have 98 different varieties of tea in the shop and all of them make lovely iced tea. So then it just comes down to what kind of flavor profile are you looking for? If you're looking for something more astringent you would look at black tea varieties, or you could go vegetal with some green or even just herbal fruit blends," he says, popping off the lid of a glass jar filled with brightly colored dried flowers and fruit. "This one is called Flying Purple People Eater – it's a mango papaya citrus wild berry herbal that brews bright blue and goes great with spiced rum, and we've got another herbal blend called Dreamsicle that is perfect for summer punches or cocktails."

These caffeine-free iced herbal brews are also a smart option for summertime drinks as a whole food alternative to dye and sugar-laced beverages. "The great thing about making it yourself is you get to decide how much and what kind of sweetener you want to use," Davis pointed out. "You can use stevia or honey or a combination." At Whimsy Tea Company, when you order an iced tea it's brewed as a concentrated tea to order with hot water in a French press; the hot concentrate is then poured over a full glass of ice. This makes for a robust and full-flavored brew.

At home, I've taken to making iced tea using the same cold brew method I use for coffee – the delicate aromas in the tea come through nicely and it keeps better in the refrigerator than hot brewed tea. When making either hot or cold brewed iced tea, use twice as much tea as you would when brewing normally – if the directions call for one teaspoon of tea per six ounces of water you would use two teaspoons per six ounces. Steep for eight to 10 hours, then strain and dilute with water and ice to taste.

If you want to sweeten the tea, it is important that granulated sugar is added when the tea is hot, otherwise, the sugar won't dissolve properly. If you are cold brewing tea or you want to sweeten glasses of tea individually, you can use a simple syrup made with equal parts sugar and water that has been brought to a boil, either on the stove or microwave. Raw or Demerara sugar makes a delicious syrup. Liquid sweeteners like this simple syrup, as well as maple syrup, honey and agave can be easily added to cold tea.

Try brewing up a tea punch this Independence Day. Play with your favorite flavors and create a new holiday tradition. Hibiscus-based herbals brew up bright red and tart, a perfect foil to summer fruit and honey. You can even blend your own with ingredients like fresh ginger, lemongrass, chamomile green tea and mint.

Combine the water and sugar and bring to a boil in a saucepan or in the microwave. Remove from heat and add the tea and steep for until cool. Strain and chill. Combine syrup and Grand Mariner if using, then add Prosecco and frozen berries. Stir briefly and serve.

2 oz bourbon (such as Bullet)

Pour all ingredients into a rocks glass filled with ice and stir until condensation forms on the side of the glass – this is how you know when its been properly diluted. Garnish with a lemon wedge.