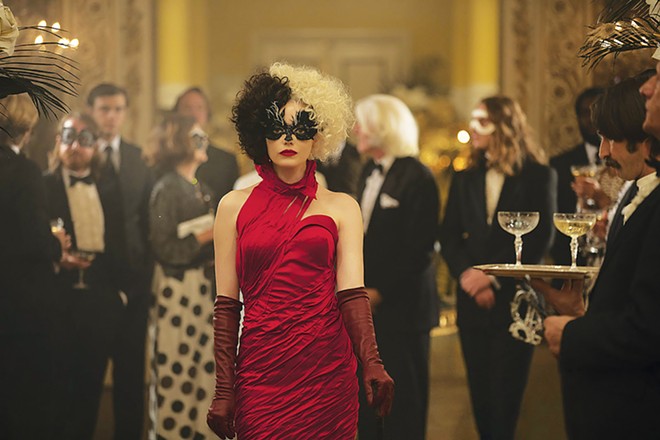 Containing one surprise after another, Craig Gillespie's Cruella is, despite its Disney label and the Mouse House's aggressive campaigning to the contrary, not for young viewers. Dark, and at times all to befitting of its title, the film takes a page from Todd Phillips' Joker to provide an origin story that casts the character in a distinctly new and somewhat sympathetic light.

Emma Stone takes on the title role, a talented but unappreciated fashion designer who finds herself working for The Baroness (Emma Thompson), a diva of the first order who has no problem taking credit for her young charge's work. This, and a piece of information about her past, prompts Cruella to take down her boss, blind to the fact she's becoming as cruel as her target.

Though it overstays its welcome, Gillespie and his screenwriters keep the viewer on their heels with one twist after another, cleverly expanding on the character's existing mythology to provide a human element behind the grand caricature we've come to know. In addition to the astounding production and costume design, Stone's go-for-broke performance keeps you hooked. In theaters.

You a delightful diversion

There's a lot going on in Brain Baugh's Finding You. Finley Sinclair (Rose Reid) is a talented violinist who botches her audition at a major New York City music conservatory and decides to take advantage of her school's study abroad program, so she takes off to Ireland. Conveniently, she stays with the family her brother lodged with when he was in the same program. On the flight over, she meets a movie star, Beckett Rush (Jedidiah Goodacre), who's filming in the area and just happens to be staying at Finley's host family's home, which doubles as a bed-and-breakfast.

In addition to these two romantically circling one another, Finley tries to help a bitter old woman (Vanessa Redgrave) put an incident from her past to rest, as well as track down the origin of a grave featured in a picture her brother left her and recover her passion for music. Obviously, there's nothing remotely original in You, and yet I ended up liking this breezy update of Notting Hill due to the sincerity Reid and Goodacre bring to the material, making it a worthwhile diversion. I smiled throughout and never checked my watch once. Sometimes, that's all you need. In theaters.

A film that constantly keeps you guessing, Anders Thomas Jensen's Riders of Justice is a deft balancing act that manages to effectively juggle seemingly conflicting tones to create a truly unique entry in the revenge genre. Markus (Mikkelsen) is a man with a violent past.  A soldier by trade, he's determined to hunt down the men who killed his wife by staging a collision involving two commuter trains.  Otto (Nikolaj Lie Cass) was also a passenger on the train and convinces Markus that this was an assassination attempt by a gang in order to kill a former member who was going to inform on them.

In addition to Otto, Lennart (Lars Brygmann) and Emmenthaler (Nicolas Bro) offer up their special brand of help in the manhunt Markus undertakes. Their quirks, while played for laughs, prove to be quite poignant, each of them suffering from past abuse that's left them damaged.  The interactions between these four is engaging throughout, while the story presents a third act twist that forces you to reevaluate all that's come before, casting the characters in a distinctly different light.  Engaging as well as thought-provoking, Riders is a unique entry well-worth searching for. Available through Video-on-Demand.