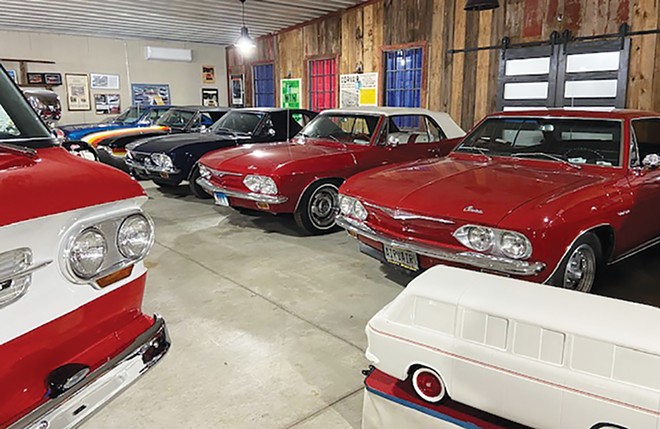 PHOTO BY CINDA ACKERMAN KLICKNA
The Corvair Museum in Glenarm is part of the Corvair Society of America.

Whether you want to learn some history or play golf, dig for treasures in an antique shop or bookstore, drive the old brick section of Route 66, walk across a covered bridge, see vintage cars or an old-fashioned drugstore, eat home-cooked meals or sample beers at a pub, you can get all your desires satisfied by taking a road trip along Route 4 from Chatham to Girard.

Route 66 followed Route 4 through Auburn, Carlinville and Staunton until 1933 when it was moved to a new alignment south of Springfield through Glenarm and Litchfield.

Start at the old train depot in Chatham, built in 1902 and in operation until 1952. Several rooms have been restored, making it possible to envision the women and men waiting for the train (in their separate waiting rooms), the ticket master collecting fares and the travelers rolling the baggage carts into the freight room.

Drive a few miles off Route 4 to the Sugar Creek Covered Bridge. Its date of construction is disputed – either 1827 or 1880. Bought by the State of Illinois in 1963 and closed to traffic in 1984, it sits within a park/picnic area. Walk across the red-painted bridge, notice the wooden beam construction and watch the water flow by in the creek.

Veer a few miles to Glenarm to the Corvair Museum, part of the Corvair Society of America. See the fastest Corvair-powered car in existence (once clocking 173 miles per hour) and the only remaining example of a Corvair body that was never finished into a vehicle.

If you are looking for a spot to picnic, head back to Route 4, south to Irwin Park. From 1900-1945, this area was the site of political and religious events and is considered the oldest public meeting spot in Sangamon County. When the new interurban provided access in 1905, it was called Irwin's Electric Park and drew 5,000 people for the opening. The park sported a dance pavilion, skating rinks and refreshment stands.

Head back to Route 4 to Snell Road and drive the 1.4-mile brick section of Route 66, listed on the National Register of Historic Places. Tourists from all over the U.S., Europe and Japan stop at this popular destination to take pictures.

Turn back onto Route 4 and drive into Auburn to the town square to see the historic double-decker bandstand, a replica of one that stood there from 1905-1961. Across from the square you can still see the old Commercial Hotel, built in 1912.

It's then on into Virden. As you approach the town square, notice the mural on the east side of the street on the wall of the Sav-Mor Pharmacy. Artist John Hubbell painted this in 2004, telling the story of Virden. Then, park and enjoy the town square with its bandstand, WWII memorial and the monument honoring the Union Miner's Strike/Riot of 1898.

A dispute between the owners of the Chicago-Virden Coal Company and the miners occurred after the company refused to honor a nationwide United Mine Workers agreement calling for paying workers 40 cents per ton, per day, plus an eight-hour work shift. When the company called in non-union African American men from Alabama, the miners blocked them from entering in September 1898. In October, another attempt with 50 armed guards surrounding the area led to a gunfight between the guards and miners. In only 10 minutes, eight miners, four guards and a railroad employee were killed. The now-famous Mother Mary Jones sided with the miners, as did Governor John Tanner, the first Illinois governor to support union rights. Some of the miners were buried in the Union Miner's Cemetery in Mt. Olive where Mother Jones was later laid to rest in 1930.

Around the square are some interesting shops. Books on the Square, with its four buildings filled with every kind of book you might want, has been in business for 30 years and may be the largest bookstore on Old Route 66. The Sly Fox Bookstore offers a variety of books, especially children's books. Other shops include Hendrick's Furniture, Wildflower Patch flower shop and Tattered Treasures antiques.

More history awaits you a few miles south in Girard. Doc's Soda Fountain, site of the Pharmacy Museum, displays old patent medicines and drugstore paraphernalia from Deck's Drug Store. Lewis Deck opened a drugstore in 1884, which stayed in business through three generations of the Deck family until 2001. The building was purchased in 2007 by Robert and Renae Ernst and now offers an old-fashioned ice cream parlor in addition to serving lunches. The couple also owns The Furniture Doctor and Renae's Window Fashions, which have been in business for 36 years. Renae made all the draperies for the Abraham Lincoln Presidential Museum.

Some might add in a round of golf at either Edgewood Golf Club (Auburn) or Oak Hills Country Club (Girard).

Of course, eating good food must be part of the day, and there are offerings in every town. On the way back home, stop at a local pub, a burger joint or Mick and Mary's, a popular spot in Thayer.

We may not yet be traveling far, but a day trip is worth it along Route 4 where you can get your kicks on Route 66.