Sheriff should video up 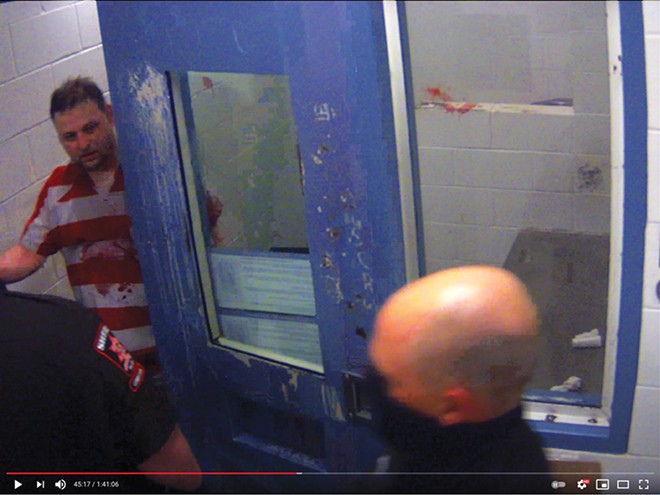 Those of us old enough to remember VHS can appreciate recent footage from the Sangamon County jail, where six people have died since 2007.

It's herky-jerky stuff, with frames taken every second or so, and plenty of grain – better footage, almost, was taken on Omaha Beach nearly 80 years ago. There's no sound. And maddening gaps.

This time, it's 91 seconds of missing footage from a camera that appeared to have the best viewpoint of a fatal encounter between Jaimeson Daniel Cody and jailers just outside his cell on April 27. One second, you see guards standing outside Cody's cell, the next – one minute and 31 seconds later – everyone is on the floor. In 2013, the county paid $5.2 million, including legal fees, to resolve a lawsuit filed after Amon Paul Carlock died after being tased in the jail, with courtroom fights over missing records – the county said that it had accidentally destroyed jailhouse videos – inflating costs.

You'd think we'd learn. Cops are prone to say they did nothing wrong – that's been the standard line for Sangamon County sheriffs going back more than a decade. And so Sheriff Jack Campbell, who's always defended Taser-wielding guards and deputies, should insist on state-of-the-art video gear in the jail, as well as body cameras on the street, to help prove innocence.

Video from jails elsewhere shows what's possible. The 2019 death of Jose Rios in the Richland County jail near Cleveland, Ohio, is captured in gruesome detail. You can hear and see everything, from guards repeatedly pulling Taser triggers to Rios howling to a guard with his boot on the inmate's spine, just below the neck, while Rios, facedown, struggles to draw his last breath. They notice he'd turned blue while lifting his limp body into a restraint chair.

The Rios footage is every bit as disturbing as pick-a-police-shooting video, but it hasn't gotten nearly as much attention as folks who've died at hands of cops, with many fatalities recorded by bystanders or by cops themselves. Inmates don't have cellphone cameras, and so if we care about what goes on in the Sangamon County jail, we should show it by demanding that the county install sufficient equipment so that we can see what goes on in the jail.

We have plenty of money. During a Facebook presentation last month on plans to spend nearly $17 million on courthouse renovations, a parking garage and new buildings for the sheriff and coroner, county board member George Preckwinkle, who chairs the board's finance committee, boasted that all of it can be done with zero net impact to county finances even if we don't get state or federal grants.

Likewise, body cameras. The county has long crowed about being more fiscally responsible than the city, which has equipped officers with body cameras. But ask yourself: Would you rather be arrested by a city cop or a county deputy with no one else around? Our sheriff complains about a new police reform law that will, among other things, require law enforcement agencies in Illinois to get body cameras.

"We will provide the blanket of security we always have," Campbell proclaimed in January, when the law passed. "We will maintain our professionalism as we fight back the tears and anger, recognizing there are legislators that do not care about you and your safety."

Cody's stepmother fought tears last week when she called hours before the sheriff's office released video that leaves so many questions. What, she asked, happened to my stepson? Was there anything I could tell her? I told her I'd seen a version of the video that appeared to have a gap in coverage and that I was waiting for a better copy. That was the best blanket of security I could offer.

Cody did bad things in his life. He'd spent time in prison. Also, he'd been a cook at Boone's Saloon until the bar closed last year due to pandemic. He'd gone to school to be a welder and had recently gotten a van, which he dreamed of driving to welding jobs. Short term, he talked of moving out of his birth mother's house and living in it. "He was so happy," his stepmother says. "We thought, 'OK, good – it's finally going to happen.'"

Cody's stepmom deserves answers. We all do. Truth is more precious than a renovated courthouse. It's beyond time that the sheriff and the county board put decent cameras in the jail and on deputies' uniforms so we don't have to wonder so much the next time someone ends up dead.