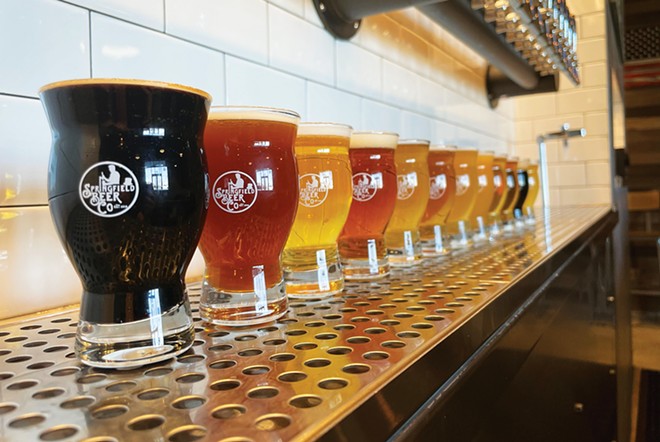 Anvil & Forge Brewing and Distilling
619 E. Washington St. (downtown)
217-679-1195
anvilandforge.com
One of a burgeoning number of craft breweries in the capital city, Anvil & Forge opened in late 2018. The place has a no-nonsense vibe, with walls made from metal siding and reclaimed barn wood, a cement floor and a mix of fluorescent and incandescent lighting. There's as much space devoted to brewing and planned distilling operations, and you can see it all from the bar. Early offerings have featured off-the-beaten path versions of IPAs and wheat beers.

Obed and Isaac's Microbrewery and Eatery
500 S. Sixth St. (downtown)
217-670-0267
connshg.com/obed-and-isaacs
Obed and Isaac's opened in 2012 and proved that brewpubs could be as popular here as anywhere else. Housed in an historic mansion nestled against a sizeable outdoor beer garden to accommodate summertime crowds, Obed's is a comfortable walk from Lincoln's Home and other downtown historic sites. Most of the inside is used for restaurant space, but there is also a good-sized bar inside and plenty of outdoor seating. The food is excellent and affordable, with lunches in the $8 to $10 range and dinner offerings less than twice that. Tap offerings are expansive and often adventuresome. Try a flight of micro brewed beers, and be sure to sample the flatbread pizza, made from grains left over from the brewing process. The atmosphere is laid back, with the beer garden featuring bocce ball courts and welcoming dogs.

Engrained Brewery and Restaurant
1120 W. Lincolnshire Blvd.
217-546-3054
engrainedbrewery.com
Located conveniently at the Interstate 72 and MacArthur Boulevard interchange, Engrained opened in 2013 and has become a must-stop for anyone who appreciates fine beer served tastefully. The oatmeal stout at Engrained is beyond exquisite, one of a half-dozen selections brewed and offered year-round, augmented by five or so offerings that come and go. It's also a farm-to-table restaurant with food offerings that range from hamburgers and entrees that cost around $10 to steaks, pork and salmon that top out at $25 or so. Great surroundings with soft lighting that makes you relax even before the first glass.

Hand of Fate Brewing Co.
107 E. Douglas St., Petersburg
217-691-1098
handoffatebrewing.beer
This place is run by a former funeral director who parlayed a home brewing hobby into statewide fame by winning a competition in 2017 to receive the honor of producing Illinois' official bicentennial beer. What The Fuzz, the winning beer that's a Hand of Fate staple, is a cream ale infused with ginger, peaches and tea, which is as perfect for the summer as it sounds. The brewery, a few miles from Springfield, is a destination beer parlor that employs such ingredients as cucumbers and honey for adventurous drinkers who aren't afraid to stray from traditional stouts and ales. The food is good and simple – nothing fancier than salads, sandwiches and flatbread pizza – and cheap, with everything priced below $10.

Sangamo Brewing Co.
109 E. Mulberry St., Chatham
217-697-8026
Facebook.com/SangamoBrewing
The newest addition to the craft brewing scene, Sangamo Brewing Co. combines the concept of a craft brewery with a living history museum of beer advertisement known as "breweriana." The memorabilia highlights brands from across the U.S., with a special focus on historic Illinois beer brands. There are also plenty of family-friendly collectibles, including historical sodas and trains. A full menu is available, ranging from appetizers and tacos to salads, horseshoes and sandwiches.

Springfield Beer Co.
3788 W. Wabash
217-441-2780
spfldbeercompany.com
A locally owned microbrewery with a tasting room serving award-winning beer brewed on-site and available on draft or in growlers to go. No food service, but feel free to bring your own.

Cooper's Hawk Winery and Restaurant
2501 W. Wabash Ave., White Oaks Mall
217-321-9100
chwinery.com
This upscale casual restaurant offers a signature menu featuring dishes designed to pair perfectly with Cooper's Hawk wines. You can also sample the wines in the tasting room and take home a bottle of your favorite from the gift shop.

Sheedy Shores WineGarden
10300 Johns Creek Rd., Loami
217-624-2024
sheedyshoreswinery.net
Enjoy the countryside and lake view while sipping on a glass of wine and listening to live music on the outdoor patio.