Students speak out on poverty exploitation, women in prison and following that "nameless feeling" 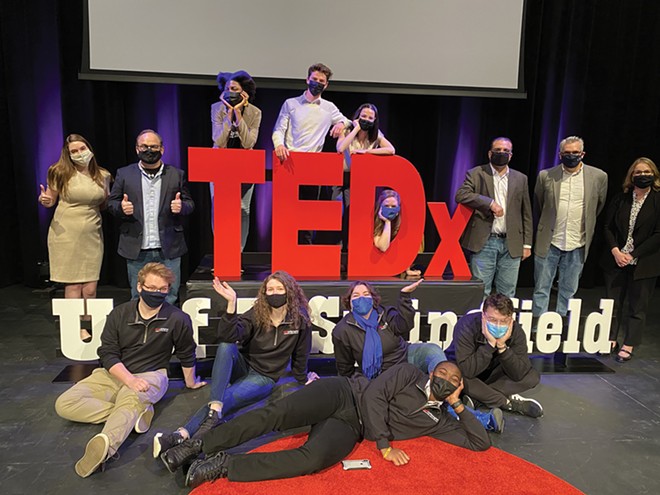 University of Illinois Springfield students spoke about their visions when the school hosted its first TEDx event on March 20. Antone Evans Jr. is a member of the UIS Student Government Association and serves as student senator for the UIS College of Liberal Arts and Sciences. He brought other student organizations on board to help recruit speakers and market the event. "We wanted to focus on bridging the gap between the community and the university," said Evans.

Evans wanted to help the university interact and collaborate with community members, even in the middle of a pandemic. The event also featured professors and other community members. Speakers presented to a limited in-person audience. The event was also streamed online and recorded.

"All of my nonprofit and mission-centric work started to open my eyes to a lot of the issues we have in the nonprofit world," Wake told Illinois Times. And through her presentation, Wake hoped to give donors agency to support dignified charities. The graduate student is seeking a nonprofit certification, so opposing charitable fundraising would be antithetical. But as Wake enters into a career in nonprofit marketing and management, she wants to "make sure all of the donors are looking for organizations that promote progress and tell stories with dignity."

Menno Servaes was 17 years old when he first considered leaving Belgium to pursue a college education and play tennis in the U.S. Discovering the possibility brought Servaes excitement and nervousness. The hardest part came when Servaes decided to tell his parents. "I could feel my heart beating out my chest and I could feel my throat narrow," said Servaes. "Too often we don't say that first word and instead we let that feeling, right before we make a decision, hold us back," he said during his TEDx talk.

Before making important decisions, nervousness and excitement can intertwine, he said. Servaes said he experienced this "nameless feeling" when he first decided to leave Belgium. Recognizing opportunity and taking small steps to overcome fear are keys to progress. "I think we can all agree decisions, small or big, are important," he told the crowd.

Servaes is now captain of the men's tennis team at UIS. He also serves as the student senator for the UIS College of Business and Management and is the president of the UIS Research Society. Servaes challenged the audience to take steps forward and to use the "nameless feeling" as a guide.

Periods, prisons and the public

Taryn Christy is a junior at UIS, majoring in both political science and legal studies. She works with the Illinois Innocence Project at UIS on active client cases. Her presentation was about period product insecurity in prisons. If an inmate is running low on period products, nurses are required to check their pad or tampon to confirm the flow requires additional supplies. Christy pointed out periods are uneven, spotty and unpredictable and this "checking" process is dehumanizing.

"No matter what, incarcerated women are at the liberty of other people making these distinctions on whether or not they need necessary health supplies," Christy said during her presentation. "We all need to be talking about periods, whether you experience them or not."

The Student Government Association collaborated with more than 10 on-campus organizations to host the event. Other presentations were on topics including one-sided facts, communism and love, combating discrimination based on skin color and the science of reading. The event provided a chance for students to take initiative and have their voices heard after a year of widespread isolation. To view the sessions, visit tinyurl.com/374c9zvm.