Barack Obama's reflections on the presidency 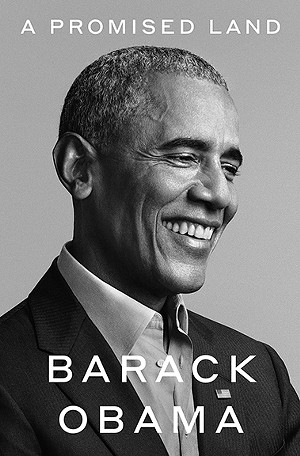 A Promised Land is the first volume of Barack Obama's presidential memoir. Although it's 700 pages long, it is highly engaging and easy to read.

The memoir is a fascinating reflection on significant events that dominated the news leading up to and during Obama's first term. Obama takes readers on a deep dive into the intricacies of health care, Afghanistan, conflicts in the Middle East, Wall Street, the financial crisis, the oil spill in the Gulf, international diplomacy, partisan politics, the rise of the Tea Party, the relentless birther conspiracy theory and the killing of Osama Bin Laden.

Regardless of one's politics, the book is worth reading to gain greater insights to issues that are as relevant today as during Obama's presidency. The complexities and challenges of the Middle East. The struggles a president faces getting his initiatives passed by Congress. The difficulties of achieving consensus among the most conservative and liberal members within the president's own party. The nuances of negotiations between the House and Senate. The politics of dealing with the opposite party. The influence of partisanship over policy. The inner struggles of members of Congress choosing whether to vote their conscience or their district.

People will debate Obama's legacy and the pros and cons of his policies at home and abroad. Yet there should be widespread agreement with Obama's perspectives on the sanctity of the presidency and the tenets of democracy.

For example, Obama conveys a deep respect for the power of the presidency. "I would never fully rid myself of the sense of reverence I felt whenever I walked into the Oval Office, the feeling that I had entered not an office but a sanctum of democracy," he writes. He says the Oval Office continually reminded him of "the privilege of my burdens and my duties."

He also reflects on the heavy responsibility of the president to keep the American people safe. "Whether Republican or Democrat, the one thing every president must obsess over, the source of chronic, unrelenting tension that burrows deep inside you from the moment you're elected, is the awareness that everybody is depending on you to protect them," writes Obama.

Obama understood the power of words. It was his powerful speech at the 2004 Democratic National Convention that launched his trajectory to the presidency. He also realized the heightened power of words delivered by the president of the United States. After he was elected, he discovered he had less freedom to say exactly what he was thinking. "My heart was now chained to strategic considerations and tactical analysis, my convictions subject to counterintuitive arguments," he writes.

Obama also opines about trust, which is elusive in today's political landscape. He writes that he ran for president to rebuild the American people's trust. "If we trusted one another, democracy worked," he writes. Today we have a long way to go to rebuild trust in government and trust in each other.

Although politicians dominate the news, much of what happens in government is the result of people who work day in and day out in the myriad of government agencies. Obama saw this firsthand. One example was observing emergency responders in the wake of natural disasters. "I was once again reminded that so much of what really mattered in government came down to the daily, unheralded acts of people who weren't seeking attention but simply knew what they were doing and did it with pride," he writes.

It's a given that the rest of the world watches us and the actions of our president. "If we want other countries to support our priorities, we can't just bully them into it," writes Obama. "To be known. To be heard. To have one's unique identity recognized and seen as worthy. It was a universal human desire I thought, as true for nations and peoples as it was for individuals." He describes making a point of showing an interest in the history, culture and people of the countries he visited.

Obama's respect for the United Nations was influenced by his mother. "Humans aren't that different from animals," she told him. "We fear what we don't know. When we're afraid of people and feel threatened, it's easier to fight wars and do other stupid things." From her he gained the perspective that the United Nations is a way for countries to meet and learn about each other and not be so afraid.

Obama made it a practice to engage with young people, whether at home or overseas. This gave him optimism for the future. He writes, "The young people I met in those town halls were a steady source of personal inspiration...so long as young men and women like that exist in every corner of this earth, I told myself, there is reason enough to hope."

As America writes its next chapter with a new president and a deeply divided country, the words of President Obama are worth considering.

Karen Ackerman Witter retired from a 35-year career in Illinois state government, working in both Republican and Democratic administrations. She believes in the importance of the institution of government and that we need to restore trust in and respect for our government.