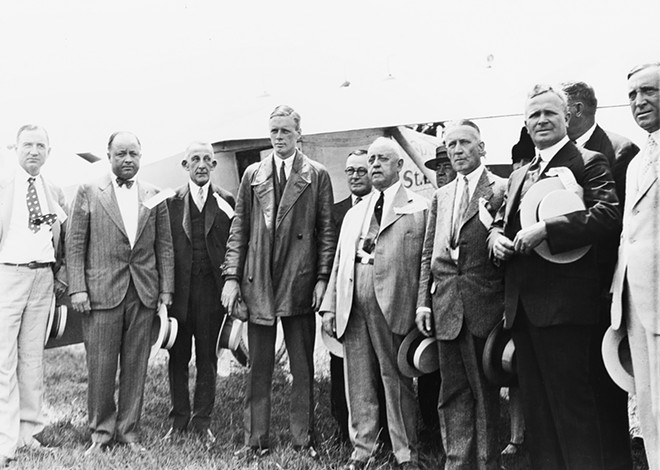 Charles Lindbergh, third from left, visited Springfield for the dedication of Lindbergh Field, Aug. 15, 1927. He stayed in a home on South Fourth Street, near Susan Lawrence Dana’s residence.

Horse-drawn carriages, trolleys, some delivery vans – these were the modes of transportation in the early 1900s in Springfield. Cars were scarce. People walked, hopped the trolley or took the train on Third Street to venture out of the city. Downtown was the site of numerous groceries, drugstores and shops that catered to every need – men's fashions and hats, women's clothing, boots and shoes, paints and wallpaper, china and glassware, jewelry, machines, etc. Arches stood on each of the four corners of the Old State Capitol block, and the downtown came alive for a yearly carnival during the state fair, held in late September.

The people who owned some of the stores and planned the carnival attractions all lived within a block of each other on Lawrence and Fourth Streets in the area now known as Aristocracy Hill.

The Dana-Thomas House Foundation is hosting a pictorial webinar on Oct. 28 called "Down the Street and Around the Corner – Zooming in on Susan Lawrence Dana's Neighbors - 1902 and Beyond."

1902 was chosen as the stepping off point for the webinar. That was the year Susan Lawrence Dana, with architect Frank Lloyd Wright, transformed her father's Italianate home into the rambling, Prairie-style home on the corner of Fourth and Lawrence. It was different from anything in the area – and still is.

The webinar will introduce the people (photos have been found of some) and tell their stories. Over 100 photos will be presented showing houses, people, Springfield scenes, stores and what can be seen in the locations today.

Dr. John King was a prominent physician. Christopher Columbus Brown was a respected lawyer. Leigh Gross Day created an amazing scrapbook called Borderland and the Blue Beyond, which is filled with photos and embellished with colorful drawings. Francis Ide manufactured the Ideal engine (cleverly named by the inventor, his father was Al Ide: Ide/Al). William J. Conkling was an attorney and his next door neighbor was his son, William H. Conkling, assistant postmaster.

If you drive up Fourth Street in the 800 block, between Canedy and Lawrence, a brick bungalow with flowers cascading off the porch and in the yard is one of the many houses that stand out. A sign announces this is the Schempp Conkling house – "Charles Lindbergh stayed here – 1926."

How did it happen that Charles Lindbergh stayed at this house? As assistant postmaster, William H. Conkling met Lindbergh when Lindbergh delivered air mail to Springfield on his route between St. Louis and Chicago in 1926. The landing area was west of town known as Bosa Field and later Conkling Field. On Aug. 15, 1927, Lindbergh came to Springfield for the renaming of the field to Lindbergh Field.

This is just one story of the people living on Lawrence and Fourth Streets. Many of the women were friends of Susan Lawrence Dana and helped with work of the Springfield Women's Club. Elizabeth Brown married Francis Ide and lived across the street. She was active in Springfield social and civic work until her death at age 105 in 1978. Her father, the lawyer Christopher Columbus Brown, had been a pallbearer for the funeral of Rheuna Lawrence, Susan's father. The Bartels, at the corner on Fourth, had five children who often visited Susan in her new house after it was completed in 1904.

Some of the people on Fourth Street lived in their houses for years, even from birth to death. Some living along Lawrence only stayed a few years and then moved on. One was Walter Eden, a lawyer whose father had run against John Palmer for Illinois governor. Eden moved on to California where he was elected to two terms in the California Senate.

A tragedy in 1916 changed the area. Sign up for the webinar to hear the story of why today we see bungalows along Lawrence instead of the old Victorian homes that once stood there.

The Dana-Thomas House Foundation acquired the Lawrence properties a few years ago as part of maintaining a neighborhood where many prominent people lived and helped make Springfield into a thriving city.

“Down the Street and Around the Corner – Zooming in on Susan Lawrence Dana’s Neighbors - 1902 and Beyond.”
Oct. 28, 7 p.m. Free. Donations accepted. To sign up, email dthf@sbcglobal.net to receive the link for the Zoom webinar.

Cinda Ackerman Klickna has often written about Susan Lawrence Dana and the Dana-Thomas House. She decided to look across the street to find out who would have lived by Susan during her lifetime.