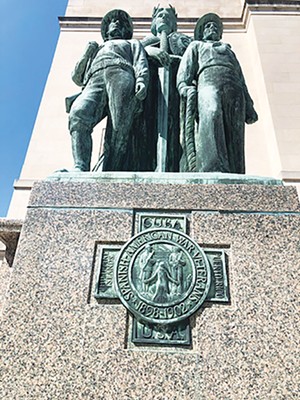 Photo by Fletcher Farrar
Spanish-American War Memorial located in front of former state armory building across the street from the State Capitol in Springfield, Illinois.

Where, I wonder, would they put a statue of Mike Madigan?

In July, the House speaker announced that he wanted to see the statues of Pierre Menard, a slaveholder, and Stephen A. Douglas, whose wife owned slaves and who was a nativist bigot, liar and opportunist, removed from the east lawn. It took Madigan 78 years to learn who Douglas was and what he stood for – he's been busy – and what he learned offended him. Happily for the speaker, today Douglas-ites in Illinois are Republicans, not that politics would have anything to do with his decision to throw Douglas to the mob.

It takes a lot to disgrace the Illinois legislature, and even more to disgrace Illinois Democrats, as the party's long embrace of Douglas reminds us, and in his July announcement, Madigan wrote, "Memorializing people and a time that allowed slavery and fostered bigotry and oppression has no place" in the Capitol of the people's government. If he believes that, he still has some housekeeping to do. The Statehouse is festooned with paintings of other slaveholders, from the French to Indians such as the Illiniwek people, after whom the state is named.

The Statehouse inside and out is crammed with memorials to land speculators and war-mongeres and Red-baiters and vote-fixers. What happens when our standards of public probity expand to encompass them too? And what about racism and imperialism? Are they bad yet? Consider the Spanish-American War Memorial that stands outside the Armory on Monroe Street across the street from the Capitol. Unlike the state memorials to Korea and Vietnam, this one does not particularize the Illinois soldiers who took part; instead, the base is engraved with the names of major battles from that conflict. Standards of public probity shift with time and politics. How many Illinoisans today have concluded that it was a filthy and stupid little war, a further spasm of the same impulse that dispossessed the native peoples on this continent.

One option is to accept that history is not made by heroes but by men and women who did good things for Illinois in spite of being bad people. The good people of California are struggling with these issues too. Dick Spotswood, a columnist for the Bay Area's Marin Independent Journal, had something useful to say. "If American society abolishes naming anything after anyone with any involvement with slavery, colonialism or even capitalism, we are heading down an endless road with curious turns," he wrote in June. "The totality of life is complicated and its nuances rarely fit neatly within contemporary ideologies." He adds, "American society, when reexamining itself, must look at the whole historical picture before arriving at an intelligent understanding of events and people past. ... Anything else is just politics."

Meanwhile, what do we do with our fallen heroes? One option is to preserve the statues but recontextualize them. Blacks Lives Matter in the UK too, of course. There, statues of slave-owners or sugar magnates who profited from slavery have been vandalized, toppled or reinscribed, we might say, with painted slogans. When one such statue was pushed into Bristol Harbor, the Bristol City Council had it recovered and put into safe storage, the plan being to exhibit it in a museum, leaving in place the graffiti and ropes placed on it by the protesters.

The same problem found a different solution in Russia upon the collapse of the Soviet Union in 1991. Busts and statues of now disgraced heroes of the revolution such as Lenin, Kalinin and Stalin were collected and reinstalled in a local park, a Garden of Fallen Monuments. Imagine the scene – a park with hundreds of Lenins that cumulatively convey the absurdity of the Communists' personality cult. Why not convert the Y block or the parking lot which now defaces the block west of the Statehouse into a memorial park, a shady grove in which would be installed shunned representations of Illinois' discredited heroes and all its monuments to folly. Me, I'd like to live long enough to see a statue of Douglas be the object of insult and derision from passing schoolchildren.

As for what to place atop the soon-to-be empty plinths on the Statehouse grounds? I propose that the Menard plinth be left empty, but reinscribed, with the words, "The perfect Illinois public figure."

Mr. Krohe taught Abraham Lincoln how to write, and has contributed to Illinois Times since 1975. Dozens of his columns and features can be read again at his web archives of his Illinois work at www.jameskrohejr.com. Bruce Rushton is on vacation.