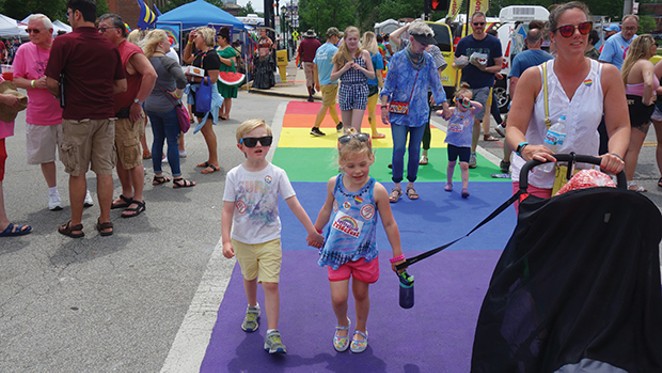 Photo by Bruce Rushton
Folks of all ages enjoyed the weather and festivities at last Saturday's PrideFest.

In America, anything is possible. Good or bad.

Three years ago, a gunman killed 49 people at a gay nightclub in Florida. On Saturday, thousands of people, no one can say for sure just how many, gathered in downtown Springfield to celebrate PrideFest.

It appeared a record turnout for a party that lasted hours, according to organizers who last year counted 15,000. By sundown, the line for beer grew ridiculously long amid loud cheers for drag queens lip syncing on the event’s main stage. The weather was fantastic for a spring festival in a year when winter has been slow to leave.

You know you’ve arrived as a destination downtown festival when cops shut down streets the night before so you can set up early. After eight years of getting up early on Saturdays to set up tables and booths, organizers this year got to sleep in, as the city, for the first time, closed down Capitol Avenue on the Friday before the celebration, which has grown from one block when it began nine years ago to several.

A parade was added a few years ago, and this year’s incarnation drew Gov. J.B. Pritzker, Mayor Jim Langfelder and congressional hopeful Betsy Dirksen Londrigan, all Democrats.  Organizer Jonna Cooley says the event traditionally has drawn more Democratic politicians than Republicans. She praised Pritzker for holding a panel discussion and reception at the governor’s mansion for parade organizers, activists and advocates for lesbian, gay, bisexual and transgender issues three days before the festival, something his predecessor never did. “We never had anything close to this,” she says.

This year marks the 50th anniversary of the Stonewall riots, which marked the birth of the modern gay rights movement in America. It’s history that isn’t necessarily taught in schools. A few days before the event, Cooley says she was meeting with festival volunteers when someone posed a question. “He looked at me and asked, ‘What’s Stonewall?’” Cooley recalls.

These days, everyone is welcome at the Springfield Pride Picnic, scheduled for June 22 at Lincoln Park, but it’s taken years. When the annual picnic began 38 years ago at property near Lake Springfield, it was, essentially, by invitation only, recalled members of the Coalition of Rainbow Alliances (CORAL), a nonprofit group that sponsors activities and raises money for the LGBT community. The picnic wasn’t publicized, and you had to know somebody to find out about it. It wasn’t OK to be gay in Springfield for lots of folks. “A lot of people were straight during the week and went to St. Louis or Chicago on weekends to be gay,” recalled Lee Korty, CORAL secretary. “When I came out in the 70s, I was going to meet someone in a bar and then go into hiding.”

During the parade, members of CORAL carried handwritten signs denoting landmarks in the history of gay activism, including the creation of the AIDS quilt, Anita Bryant’s crusade to overturn a Florida anti-discrimination law, the American Psychiatric Association’s decision to stop classifying homosexuality as a mental disorder and the heroism of Leonard Matlovich, a Vietnam veteran who won the Purple Heart and Bronze Star before outing himself to Air Force commanders to test the military’s ban on homosexuals. Deemed unfit for duty, he was discharged.

“To see all those people coming down the street – not in my lifetime,” Korty said after the parade. “I never thought I’d see that happen.”

But Korty already knew that people can change. After he came out, he said his father wouldn’t speak to him for two years. Ultimately, he says that his dad became close with Bert Morton, his partner.

“A couple months before he died, he said ‘Bert, I think you’re my best friend,’” Korty recalled.