Slower than a speeding bullet 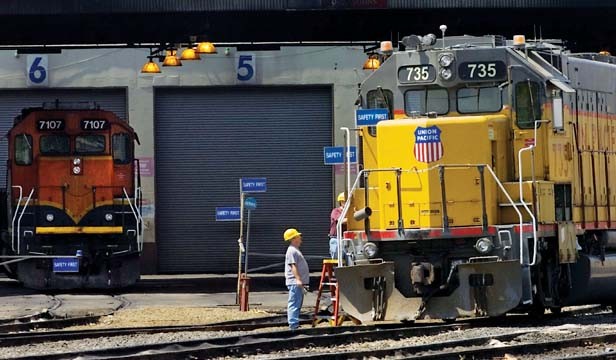 Illinoisans often feel like a space traveler who, having intercepted the TV signals that escaped from Earth a generation ago, sees the past when it was still the present. On July 20, authorities announced a further step in the development of Illinois’ slightly faster passenger rail corridor. Some 90 miles of tracks from roughly Alton to Lincoln (excluding Springfield) will be upgraded to support trains running at 110 miles per hour. They thus will match the dizzying speed of Japan’s pioneering Shinkansen trains – as the Japanese bullet trains ran 36 years ago, upon their debut.

Japan’s passenger trains run faster today. Passenger trains everywhere run faster today, at least in the developed world. In Illinois and other U.S. states, the preferred means of fast travel between Chicago and Springfield remains an Escalade with a radar detector. The State of Illinois is trying to catch up on the cheap by running passengers trains between the state’s official capital and its unofficial capital on existing tracks owned by the Union Pacific railroad. Better track and more sophisticated signal and safety systems should make it possible to run trains closer together on one track. It’s all a bit like cramming data onto an old copper telephone line meant to carry only voice transmissions. In effect, the U.S. is committed to a railroad version of DSL while the rest of the world is building dedicated fiber optic lines.

UP is perfectly capable of running passenger trains – that company runs the commuter line that serves Chicago’s North Shore, for example, and does it well – but its real business these days is hauling freight. UP has agreed to allow publicly subsidized passenger trains to run on its tracks for the same reason that the poor man agrees to marry a woman he doesn’t like because he needs a new toaster. Making its tracks fit for faster passenger trains has justified hopper cars full of federal aid to the railroad. (That most recent project is being paid for with $98 million in federal stimulus money.) These improvements will also enhance UP’s intermodal freight service, which has been described as the high-speed rail of the freight business.

Chances of a from-scratch passenger-only rail line being built seem as remote as $10 corn, and not only because of the lack of obvious funding. Building a genuinely high-sped train system would strain our state’s dilapidated decision-making infrastructure to the point of failure. There are too many small towns between Chicago and St. Louis, for example, whose residents will be happy to give a ride on a rail of a rather old-fashioned kind to any lawmaker who backs the closing of rural crossings.

Much as I would love to be able to ride one, truly fast trains on the Chicago-St. Louis route not only won’t be built but arguably shouldn’t be built. The prudent spender of public money will put such a line where traffic is, and only a few places in this country have a sufficiently dense population to sustain high-speed train service. The obvious one is in the Northeast, connecting the nation’s No. 1, 4, 5 and 8 metropolitan areas (New York City, Boston, Philly and D.C.) whose combined population is 44.7 million. Another is California, home to our No. 2 and No. 6 metro areas (Los Angeles and San Francisco) that are home to 25.2 million people. The Chicago-St. Louis corridor, alas, connects the nation’s No. 3 metro area with a fading river city that is the nation’s No. 15 metro area.

The risk to the pubic purse is matched by a risk to the nation’s private freight movers. Critics have begun to ask whether speeding up America’s passenger trains a little might risk slowing down its freight trains a lot. Federal money comes with more strings on it than a cheap rug. With federal funds come federal rules, about who gets to use the new tracks, who pays for accidents, and who ponies up when trains are late. Public authorities told private rail firms how to operate passenger trains for roughly a century ending in the 1980s, and their politically inspired ruling helped bankrupt several great railroad companies, leaving their infrastructure a shambles.

And freight – not tourists, not bureaucrats, not shoppers on a spree – are the cargo that really matters to Illinois’s economy. Since it was deregulated in the 1980s, the industry has made U.S. freight rail a model for the world, and, by dramatically cutting the costs of transporting goods, lowered the cost of living for everyone. It’s hard to see how either the traveling or the consuming public will be served by Illinois trading a freight system that works for a passenger system that might work.