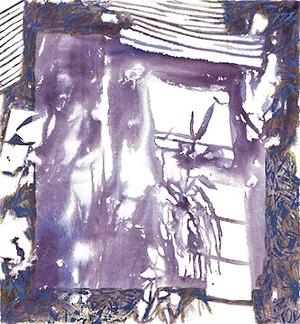 PHOTO COURTESY OF DEMO PROJECT
“Opal Hours” by Angelina Gualdoni, part of “Weight of Light” currently on display at DEMO Project.
Springfield’s independent contemporary gallery known as DEMO Project is heading into its final year. The small building on the Springfield Art Association campus is expected to meet its long-ordained demolition in either the spring or summer of 2018, in order to make way for new SAA facilities. As the inevitable end approaches, however, the high quality of work on display at DEMO continues with monthly exhibits by a wide array of impressive artists – many from the central Illinois region, some from as far away as Texas and Oklahoma.

Currently on display in the DEMO’s front gallery is “Weight of Light,” featuring artists Paola Cabal of Chicago, Gina Hunt of Bloomington and Vincent Como and Angelina Gualdoni, both of New York, in a group show curated by Melissa Oresky, a professor in Illinois State University’s drawing department. True to its name, the work here is concerned directly with light, which acts as a subject or element in the pieces, as opposed to simple illumination. For instance, Cabal’s “Backlight” consists of a pair of lightboxes mounted on the gallery walls which give the illusion of windows, featuring backlit photos of the actual view one would see from the front of DEMO – if there were in fact windows there. The show’s opening took place at night, while the images in “Backlight” were taken in broad daylight, which provided a level of disorientation beyond the simple illusion of windows.

“Opal Hours” by Gualdoni also portrays a window, this one painted in acrylic and oil on canvas, featuring a representation of light so believable it almost cues the viewer to squint. This effect is in striking contrast to the dense, vibrant colors of “The Rainbow is a Stereoscopic Picture v1” by Hunt and Como’s “Doom Patrols,” with its framed black aluminum foil drawing your attention only to negate all light.

Also relying heavily on darkness is Oresky’s own “Succulent succulent” exhibit in the rear gallery, which is a two-part representation of an agave plant (the succulent of the title). The small gallery is illuminated solely by a monitor playing constantly transforming video images of the plant, while a static collage of the same plant mounted on the nearby wall catches light from the video, creating what an artist statement described as “a conversation between stillness and movement, reflection and absorption, singularity and multiplicity.”

“Weight of light” and “Succulent succulent” will remain on display at DEMO Project on the Springfield Art Association campus, 732. N. Fourth St. DEMO will be open for the duration of the exhibit on Saturday afternoons from 1 p.m. until 4 p.m. or by appointment. The exhibit will conclude on April 6 with an artist talk at 6 p.m.