This is the village it takes 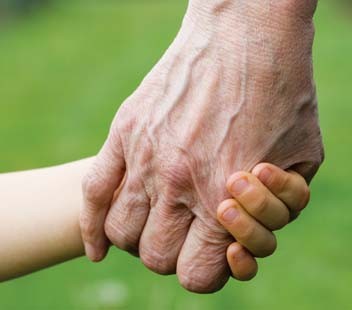 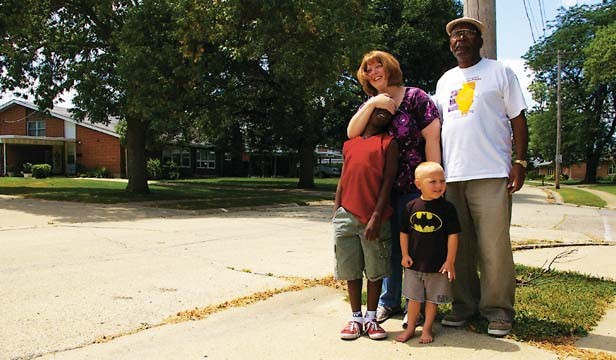 On a quiet street in Rantoul sits a small neighborhood of 15 nondescript duplex houses, part of a larger subdivision built decades ago to house the families of pilots and workers at the now-closed Chanute Air Force Base. Although it’s impossible to tell just by looking, something remarkable is happening here: adopted kids from troubled backgrounds are finding acceptance and support in the arms of neighbors old enough to be their grandparents. That’s by design at Hope Meadows, a community bringing together several generations of people from all walks of life for one purpose: building a safe and stable environment for adopted children.

Started in 1994 by Dr. Brenda Eheart, a researcher at the University of Illinois at Urbana-Champaign, Hope Meadows is a neighborhood of adopted children, their families and senior citizen volunteers, all working together to form a community of support and interdependence. What was started as a permanent destination for adopted children has also become a place where adoptive parents find support as they deal with often troubled kids, and where seniors can find continued purpose as they age. Hope is the first iteration of a social services model known as ICI – intergenerational community as intervention – and it is on the verge of spreading nationwide.

Families seeking to adopt move to Hope Meadows and are paired with children in need of a permanent home. Each family lives for free in one of the 15 six-bedroom homes converted from pairs of duplex apartments, and one parent is employed by Hope Meadows as a “family manager,” earning a stipend and health insurance coverage for the family. Meanwhile, senior residents at Hope volunteer for six hours each week and receive reduced rent on an apartment in the neighborhood. There is on-site counseling available for adopted children, and the whole neighborhood regularly participates in group activities that build intergenerational relationships. The secret of the program’s success is that the relationships are allowed to form naturally, which helps provide meaningful interaction and a sort of informal therapy for all involved. 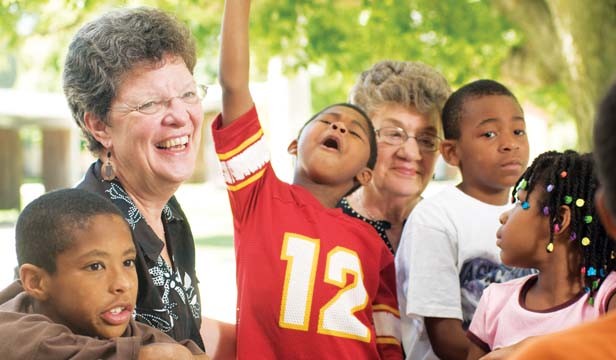 Eheart says the idea for Hope Meadows came out of her research at UIUC. The State of Illinois had just gotten into the adoption and foster care business in the late 1980s, she says, and children were pouring into the system at a rate of about 1,000 per month due to the emergence of crack cocaine. Many of the foster care placements didn’t work well, and children would often get shuffled from family to family or end up in juvenile detention. Eheart began planning a community of adoptive families in 1992, but the final piece of the puzzle came about one year later, while Eheart was visiting a friend out East who turned her on to Maggie Coon, a community organizer in Philadelphia. Coon had created a system in which college students would live in the homes of senior citizens for reduced rent, and in return, would help maintain the homes.

“Flying home somewhere over Ohio or Indiana, I flipped it around in my head and thought instead of young people helping the seniors, we’ll put seniors in there for reduced rent, and they’ll help the children and families,” Eheart says. The arrangement has worked well, she says, and researchers from around the nation visit Hope Meadows regularly hoping to replicate their successful results elsewhere.

Currently, 30 adopted kids in 10 families live among almost 50 senior volunteers at Hope, sharing birthdays, activities, work and struggles. On one recent day at the neighborhood’s Intergenerational Community Center, a group of young children and seniors laughed and joked while playing a life-sized game of Chutes and Ladders.

“My husband calls it his ‘Leave it to Beaver’ neighborhood,” says adoptive parent and Hope resident Debbie Calhoun, referring to the near-perfect world portrayed in the popular 1950s sitcom. Everyone at Hope knows everyone else, Calhoun says, and everyone gets along well most of the time. She and her husband, Kenny, were the first people to move to Hope Meadows when it was formed in 1994, and they have adopted eight children as their own, in addition to their biological daughter, Shana. One of the Calhouns’ adopted sons, James, was labeled a “failure to thrive” when they adopted him at age 4, Debbie Calhoun says. James is now 20, married, going to college and has four jobs.

“All the sleepless nights just go away when you see them succeed,” she says proudly, adding that the support they receive from the community makes parenthood much easier.

“Being out here, with the seniors and staff involved, we’ve got constant support,” Calhoun says. “They’ve raised their own kids and give us some hindsight about what might work. The support makes a lot of difference in the closeness out here, because everyone is looking at what’s good for the children, and it’s not just us by ourselves.”

The children adopted at Hope often come from situations of sexual abuse, neglect or overwhelmed parents, Calhoun says, and they often have issues with trust and abandonment. At Hope, those children find a permanent place to unpack their bags, literally and figuratively.

“So often, kids in the foster care system will get bounced around to family after family,” she says. “They never get a chance to rest and let go of their fear and hurt.”

Being a permanent home is an important part of the ICI model, says Hope’s executive director and CEO, Elaine Gehrmann. Hope used to accept foster kids, Gehrmann says, but the bonds that were broken when those children eventually left were too hard on everyone involved, so the program now focuses solely on adoption. 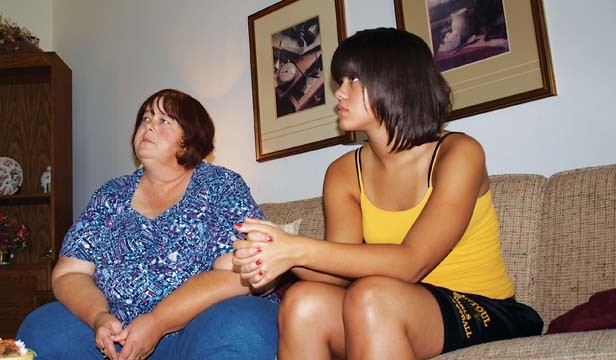 PHOTO BY DAVID HINE
Adoptive mother Debbie Calhoun sits with her biological daughter Shana in one of the homes at Hope Meadows. The Calhouns have eight adopted children.

“It was like they were losing not only the attachment to the foster parents, but an attachment to the entire community,” Gehrmann says. “Childhood is all about forming attachments. That’s how we evolve, and if that’s disrupted when you’re young, it makes it harder to do it again and again. It’s harder to trust and believe that this is really going to be your new family, your new home.”

For adopted children, the community provides a safe and stable place to grow. Sixteen-year-old Grant Morrow, originally from Chicago, was adopted by a Hope family at age seven, and he says he has learned a lot from living there for nine years.

Morrow already has plans to start a clothing business when he grows up, as well as a store to rent movies, games and musical instruments. He says a senior volunteer named Joan has supported his growth and helped him through some tough times.

“She took care of me when I didn’t have anybody else to talk to,” Morrow says. “I like it here because people are there for you.”

The community’s senior volunteers benefit from the program as well, and not just in the form of reduced rent. Gehrmann says seniors at Hope generally feel a sense of continued purpose because of the impact they can have on young lives, and the relationships they build provide meaningful interaction. As seniors grow older, they can rely on community members to look after them.

Senior volunteer Mary Trotter works in the administrative office at Hope and enjoys doing activities with young children in the community. She tells about winning over a troubled young boy, who now refers to her as his best friend.

“It’s very rewarding to see them grow up,” Trotter says. “He used to be my little man, but he’s not so little anymore. He’s on the honor roll now, and he has come a long way.” 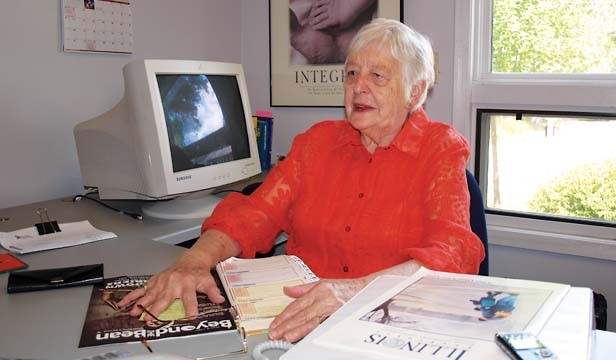 PHOTO BY DAVID HINE
Senior volunteer Mary Trotter says it is rewarding to have a positive impact on young lives at Hope Meadows.

David and Carol Netterfield moved to Hope Meadows from Nebraska in 2008 to retire, and they joke that they’re busier now than ever.

“I always thought as a younger person, when I retired I would prop my feet up and sit in front of a TV for the rest of my life,” David Netterfield says. “But our schedule is so busy … it’s just amazing how busy you can be when you care more about somebody else than you care about yourself.”

Dr. Eheart says the seniors are an integral part of Hope’s success because they provide wisdom and support for other community members.

“I’m really convinced the program would have folded in the first two years if it hadn’t been for the seniors,” Eheart says. “I think they, as a whole, just absolutely love the program and love their life. It really becomes a way of life for them.”

Dr. Eheart says the ICI model isn’t going to replace the state’s adoption system, but it can provide an alternative. In many states across the nation, the number of young single mothers being locked up for nonviolent crimes is growing rapidly, Eheart says, and the ICI model could be adapted to reroute them away from incarceration toward a brighter future. She points to a drug-abuse treatment project already underway in Portland, Ore., that was based on the Hope model.

“I really see it as an option to keeping some of these vulnerable populations out of the current system, and it can certainly be more cost effective,” Eheart says. “They can get the support they’ve never had, and it provides them the opportunity to give back.”

Despite the fact that many of the adopted children are African-American and most other residents are white, Gehrmann says racial and cultural differences don’t matter at Hope.

“I think it helps that everybody gets to know everybody else as an individual, and when you know someone as an individual, it’s harder to put them into a category,” she says. “And the nice thing about this is it’s intentional. You come here knowing the setup of the community, and the reality is that the majority of children in foster care are African American. People who choose to come here know that it’s intergenerational, interracial, inter-whatever, and I think the differences aren’t something to be overcome, but really to be celebrated.”

Hope Meadows was started in 1994 with a $1 million grant from the State of Illinois. Now the community is funded by grants, private donations, rental income and contracts with the Illinois Department of Children and Family Services. The success of the Hope Meadows program led Eheart to establish Generations of Hope Development Corporation, a nonprofit company aimed at spreading the intergenerational community model nationwide. Generations of Hope receives support from the donors like the W.K. Kellogg Foundation, the nonprofit organization started in 1930 by the famous breakfast cereal inventor of the same name.

Though the State of Illinois’ financial crisis has delayed some payments to Hope Meadows, the state recently promised more than $1 million to Hope for an expansion. The administrators of Hope plan to build a multi-apartment complex called Hope House to accommodate more senior volunteers. Gehrmann says the community actually has five empty homes that have been converted from duplexes to full-size homes, but those are meant to house adoptive families. Seniors stay in the unconverted duplexes. 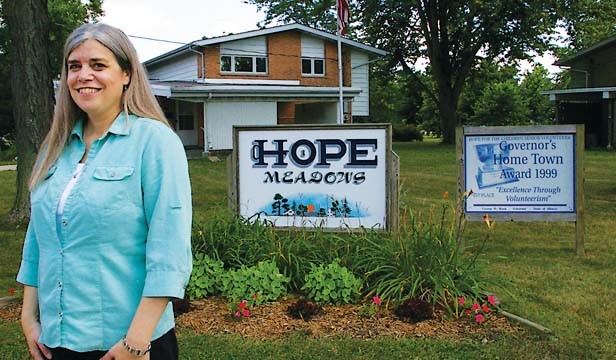 A former Unitarian minister and public defense attorney, Gehrmann says she wanted to be a part of Hope because it “deals with the whole person and their whole situation.”

“Being a lawyer, clearly I helped some people, but I could only help them with their legal problems,” Gehrmann says. “A legal problem may be the least of your problems, and may be a manifestation of a larger problem. This place provides a lot of the things that communities used to provide that they don’t anymore.”

To read some of the extensive research about Hope Meadows and the "Intergenerational Community as Intervention" model, visit http://tinyurl.com/23hyemf.