One of the reasons Stephen Soderbergh’s Ocean’s 11 was such a success is that it contains am effortless sense of cool from a bygone era.  Perfectly cast, George Clooney, Brad Pitt, Matt Damon and the rest of their crew had just the right amount of swagger to make their characters the embodiment of suave confidence, none overplaying their part, with Soderbergh steering the ship with nary a tangent, guiding the movie with the single-minded purpose to entertain.

The fact that the follow-ups – Ocean’s 12 and 13 – failed to generate the same vibe despite having the same personnel in front of and behind the camera, shows how difficult it is to catch this sort of lightening in a bottle.  And while it might not be fair, Gary Ross’ Ocean’s 8, a logical spin-off focusing on another duplicitous Ocean, has the unenviable task of being as cool as its cinematic big brother. 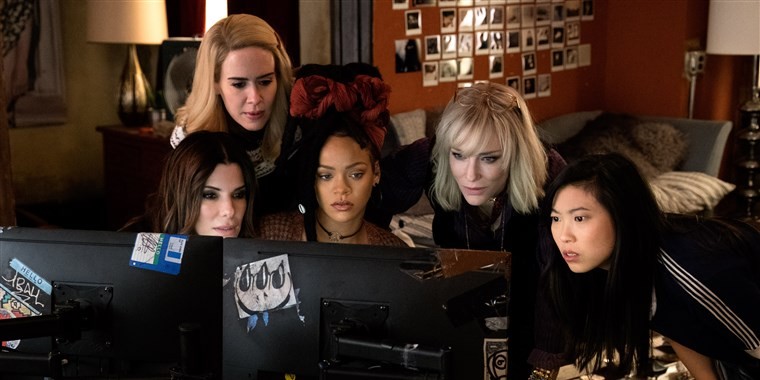 There are times when it almost succeeds, but Ross, who co-wrote the screenplay, simply doesn’t have the sense of energy a film of this sort needs. Instead of aiding the cast, there’s a sense they carry HIM across the finish line, the performers providing a sense of verve the director sorely lacks.

Sandra Bullock is the Ocean in question this time around, her Debbie having just been released from prison after being framed on a charge of forgery.  During her five years in stir, she’s concocted a plan to crash the annual Met Gala and steal a Cartier diamond necklace worth over $150 million.  Obviously, this is not a job she can pull off alone and she has a crew in mind she quickly calls together.  Her bestie Lou (Cate Blanchett) is quite smart and has the necessary connections, namely diamond expert Amita (Mindy Kaling), pickpocket Constance (Awkwafina), computer hacker Nineball (Rihanna) and the kleptomaniac fence Tammy (Sarah Paulsen).  They recruit fashion designer-on-the-ropes Rose (Helena Bonham Carter) to design the dress for actress Daphne Kluger (Anne Hathaway), giving them access to her and the diamond necklace they seek, which she’ll happen to be wearing during the gala.

Much computer hacking, many instances of infiltration and subterfuge as well as crack timing are needed to pull this off and it comes as no surprise that all falls together nicely, despite a hiccup or two along the way.  The film’s biggest problem is that of pacing – Ross takes far too long to put the pieces together, delaying the heist so long it seems as though he’s daring the audience to stay engaged.  And while there are certain notes we expect him and co-writer Olivia Milch to hit in their screenplay, the fact that Debbie entwines issues with her ex (Richard Armitage) in with the heist, much as her brother Danny (Clooney) did with his (Julia Roberts) in 11, comes off as lazy screenwriting.

The biggest surprise in the movie is that its third act is devoted to the investigation of the crime, with dogged insurance investigator (a very enjoyable James Corden) tracking down every lead.  This does not play out as the usual denouement and ends up being one of the most entertaining aspects of the film.

Unfortunately, it’s too little too late.  Instead of gasps of surprise and a feeling of elation from having been cleverly fooled, Ocean’s 8 leaves the audience with a sense of “meh,” a feeling that they had seen something adequate but far from satisfying.  The cast is very, very good and if they’re given the chance to steal once more, they need to get a better script, whether it be by hook or by crook.