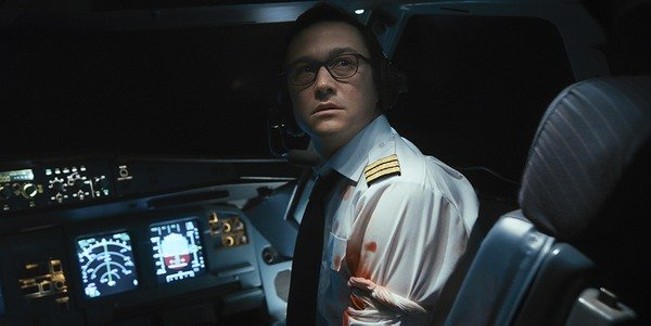 I always appreciate when actors get out of their comfort zone, taking on a role unlike any they've done before or signing up for a project knowing they'll have to carry most of the load to make it work. Two of the more impressive examples of the latter we've seen in recent years include the 2010 Ryan Reynolds' feature Buried and Tom Hardy's 2014 Locke, films in which the performers are the only ones seen on screen for the entire running time. A challenge to be sure, both actors were put through the ringer, required to run the emotional gamut in extremely tense situations, never allowed to lean on any on-screen co-stars.

You can now add Joseph Gordon-Levitt to the club of daring solo cinematic performers with 7500, a taut, timely thriller that finds the actor shouldering the load as a pilot who finds his airplane highjacked by a desperate group of terrorists. Unfolding in real time, the movie serves as a calling card for German writer and director Patrick Vollrath, who makes his feature film debut here, fashioning a genuinely effective thriller under the most challenging of circumstances.

Vollrath creates a sense of subtle dread from the start as we witness silent security video taken from the Berlin Airport. We see the hijackers in question pass through security checkpoints, going to the duty-free store and waiting in line with hundreds of travelers, who are unaware that these men will soon commit heinous acts of violence. Captain Tobias Ellis (Gordon-Levitt) certainly isn't expecting anything out of the ordinary as he gets onboard to pilot a flight to England. He's greeted by Gokce (Aylin Tezel), a flight attendant he shares a child with who's excited they are going to be moving in together. He quickly gets to know his co-pilot Michael (Carlo Kitzlinger) and after the pair go through the necessary preparations, they get the flight in the air.

Vollrath quickly establishes the parameters of the film as the viewer gets an intimate look at the cockpit of the plane as we see the pilots go through their normal routine, information that proves vital once the in-flight terror begins. A video camera above the cockpit door that shows the passenger area is vital as we and the pilots are able to witness the criminals' increasingly violent, desperate plan unfold from a safe distance. Protocol dictates they cannot open this door, a policy Ellis is tempted to break as the situation becomes more dire, witnessing the terrorists threaten one passenger after another unless the door is opened.

That this barrier is breached comes as no surprise, an event that only increases the tension as Ellis soon runs out of options. Though the cockpit is confined, Vollrath finds enough different camera angles within this tight space to avoid a static feeling. This only adds to the tension as avenues for escape are limited, an aspect the filmmaker highlights with a variety of tight shots and limited camera movement.

While Vollrath creates the visual tension, Gordon-Levitt provides the emotional foundation of the film. Long takes are employed throughout, requiring him to take his character from one emotional extreme to another, as Ellis nearly falls apart on numerous occasions, only to rally, gather himself and maintain a sense of calm under extreme pressure. The actor is fully convincing, giving an emotional, powerful performance that, in the end, is a portrait of courage under extreme duress. Taut, tense and well-crafted, 7500 proves to be not just an engaging thriller, but a film anchored by a dynamic performance by an actor willing to challenge himself.